I've been asked many times about what squaring the receiver face on AR pattern uppers is, and why someone might want to have their upper squared. Simply put, squaring the receiver face is making sure that the shoulder where the barrel butts up against the receiver is perfectly perpendicular to the receiver extension/bolt carrier group bore. Because the barrel interfaces with the upper receiver in two ways, by slipping inside the upper AND by butting up against it, it's important that BOTH interfaces are properly aligned with each other, or else accuracy and consistency in your finished build may suffer. 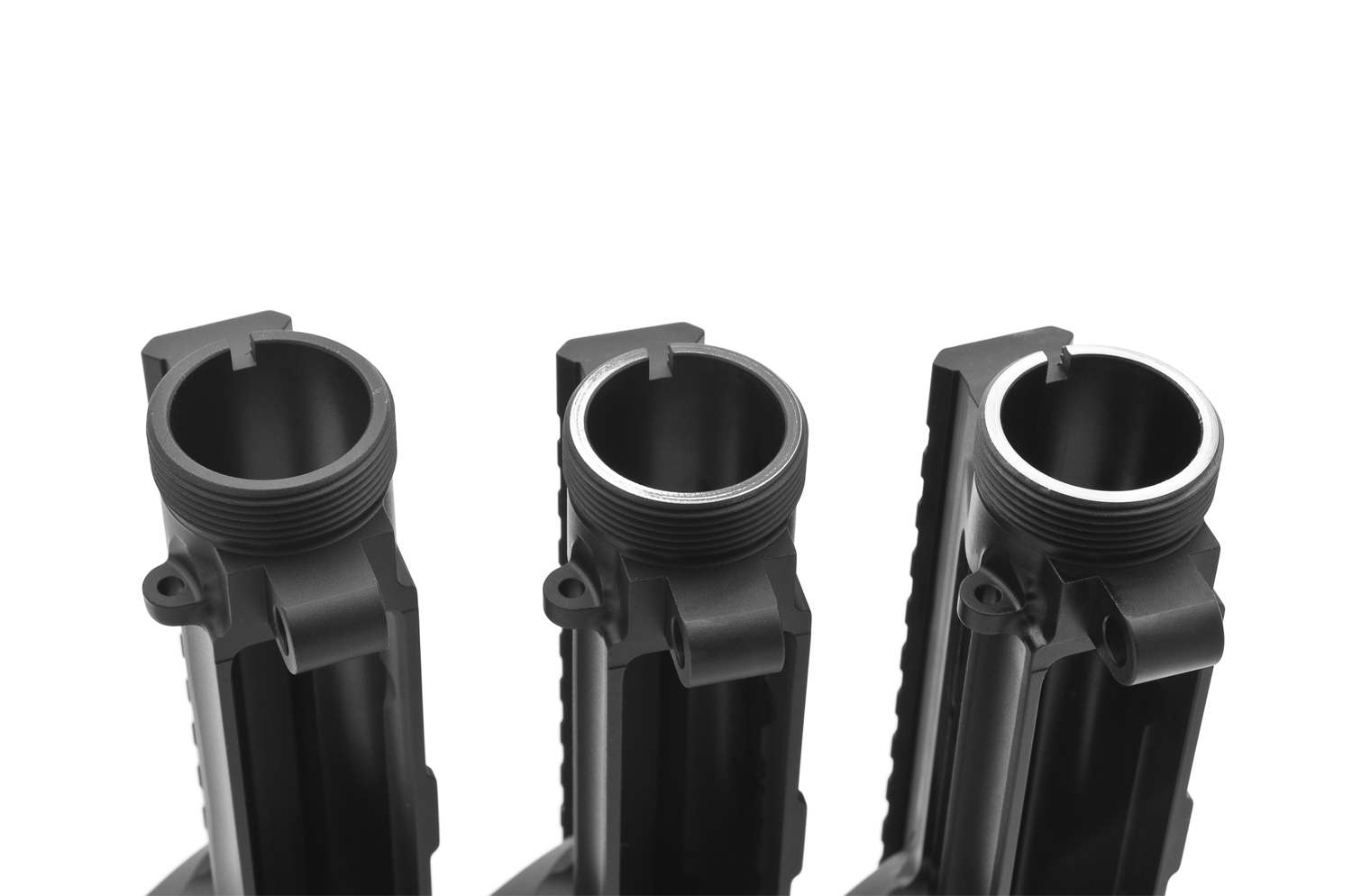 Do I need to square my upper in order for my AR to function reliably?

ABSOLUTELY NOT. Proper function and reliability are impacted by many different factors, but having a square receiver is not one of them.

What are the real benefits of squaring an upper?

Improved and/or more consistent accuracy is one reason why you would want to square your upper receiver. Accuracy from an AR pattern build comes from a few different places. How secure the interface between the barrel and upper is, the quality of the barrel, the quality of the ammunition, and freefloating the barrel. Squaring the upper ensures that the shoulder of the barrel extension has 360 degrees of solid and even contact with the upper while being perfectly inline with the bore of the upper. If the upper is not square, than pressure will not be evenly applied to the barrel extension which can cause accuracy and barrel harmonics issues. If you've ever had an upper that shot way off in one direction, forcing you to use the extreme ends of the adjustment range on your sight or optic, or if you've had an upper with a high quality barrel that would always throw random fliers in the same spot, chances are you could have benefited from squaring your upper. Another reason you might consider squaring your upper is to get a more even bolt engagement with the barrel extension. When force is evenly applied to all your bolt lugs, bolt life can be increased. If you're a high volume shooter and you're constantly breaking the same lugs on your bolts over and over again, your upper might not be square. Also, bolt life for alternative calibers like 6.5 Grendel and 7.62x39 can increase, as those bolts are more prone to failure by the nature of their design.

This particular receiver is showing a high spot on the left side where the anodizing has been removed.

Do I need to square my upper in order to maximize the accuracy potential of my build?

The answer is maybe. With modern machining processes and tight tolerances, many quality uppers are very close to being square from the manufacturer. If your upper is already perfectly square from the manufacturer, than there is no benefit in squaring the upper again. The tricky part is figuring out if your particular upper's receiver face is square to its bore, and we have not found a good way to check that alignment besides trying to square the upper again. At Bexar Arms, we sell Aero Precision uppers because we have found that after comparing them to many other manufacturers, Aero is the best upper on the market for the best price. That being said, even great uppers like what Aero manufactures can use a little help. After squaring the faces of many Aero uppers, while they're close, there is often a bit of improvement that can still be made.

If I'm using a low quality/poor shooting barrel, will I see an improvement in accuracy after squaring?

No you will not. Squaring an upper will not miraculously improve the accuracy of a poor shooting barrel. What squaring WILL do is get the most out of a good shooting barrel. Remember, you will also be making more even bolt lug engagement with the barrel extension which can help increase bolt life, especially in calibers like 7.62x39 and 6.5 Grendel.

Since you're not referencing the receiver threads or the top rail, isn't squaring useless or ineffective?

Absolutely not! You hear people say that you should tighten and loosen the barrel nut 3 times before giving it the final torque, and the reason for doing that is to pre-deform the threads so that the barrel nut makes good contact with the barrel extension. Squaring the upper is not meant to reference the top rail, it's meant to reference the bore of the upper. Making more even bolt lug engagement is a big reason to square an upper, as well as making sure your barrel is making even contact with the upper. 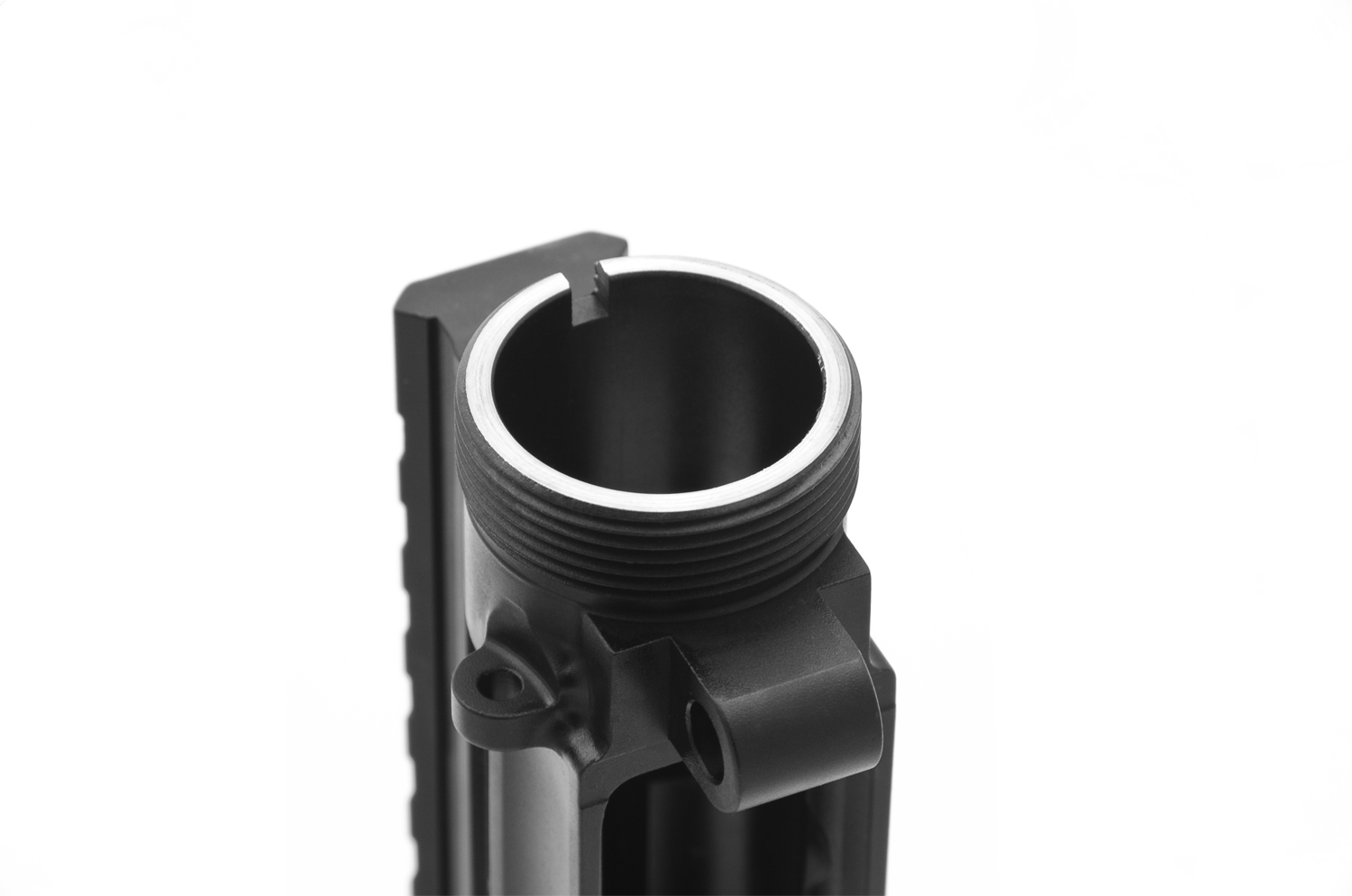 Once completely squared, the anodizing will be removed from 360 degrees of the upper's face, though it may not remove all of the anodizing. Above shows the entire face with all the anodizing removed, but just getting a ring of bare metal all the way around the upper is enough.

I've heard that squaring the upper removes the hard anodized finish and ruins the upper. Is that true?

This idea comes from a place of incomplete knowledge, and it is NOT TRUE at all! While the anodized finish is very hard and durable, it is only a surface finish. Anodizing does not impact the toughness or strength of the base aluminum, it only protects its surface. While squaring the receiver does indeed remove the anodized layer where the barrel meets the upper, no strength or durability is lost by doing so. When you see uppers or other aluminum parts marketed as 6061-T6 or 7075-T6, the first four numbers (6061 or 7075) refer to the composition of the aluminum alloy, and the T6 refers to how that base metal was tempered or heat treated. If you're familiar with knives, you'll know that even the highest quality steel will not hold an edge if it isn't properly heat treated. In the same way that steels come in different grades and can be heat treated differently, 7075 aluminum is a superior alloy compared to 6061, and the T6 tempering gives either alloy the toughness and mechanical properties desired. Click here to see more detail on the technical differences between 7075 and 6061 aluminum. The Aero Precision uppers that we sell are all made from forged 7075-T6 aluminum for its superior strength and durability.

Here at Bexar Arms, we consider receiver face squaring a critical step in making a quality build, so we offer it to anyone who wants it. Squeezing the most performance and accuracy out of your build means going above and beyond what is normally considered "good enough" and we're happy to put in the extra work! If you have any further questions about squaring your upper, or have other questions about building AR's in general, please feel free to email me at help@bexararms.net and I'll get back to you as soon as I can.